You are not alone in this 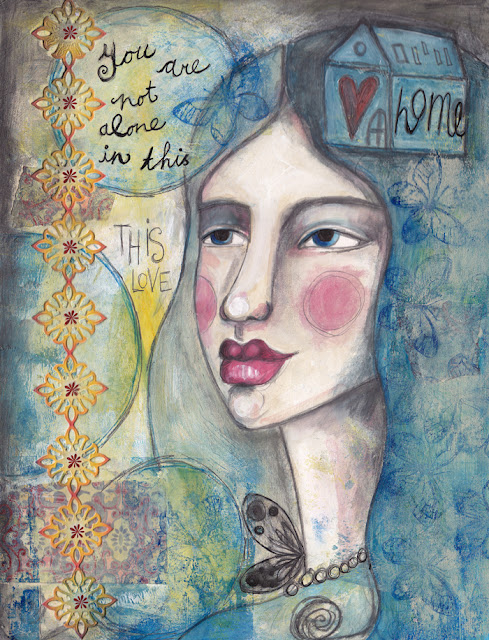 So, I'm sitting here a few hours away from going in to hospital to possibly have my labour induced. I'm having very mixed feelings about this.

On the one hand, I realise that not inducing can pose a risk to baby as the placenta tends to become less efficient after 42 weeks (though some sources say the placenta starts to become less efficient over 48 weeks, the info is conflicted on this). Also, the baby can become big which can cause problems during delivery (shoulder dislocation for one), it is also more likely to pass meconium into the water and if baby inhales it, it can cause pneumonia.  Instead of 1 out of 1000 babies being stillborn before 42 weeks, the figure goes up to 2 out of 1000 when they stay in over 42 weeks.

On the other hand, induction comes with its own potential problems: prostaglandin pessaries and/or synthetic oxytocin can bring on stronger than usual contractions which can cause the baby to go into distress. It can also mean that I'm more likely to want/ need pain relief which can mean a need for more intervention.

More than this. I don't feel emotionally ok with the idea of induction. If feels like a version of aggressive eviction: "you must get out now because we say so" type thing. I know that this isn't rational and possibly very hormone influenced, but I want my baby's very first choice in life to be 'his own'. Ie: I'd love for him (or my body whichever actually makes that decision) to make the choice to come out. Not me or a bunch of medical people. Why would a baby stay inside if it doesn't need to? That question keeps coming to me. Surely nature knows what it's doing, no?

Don't get me wrong. I know this is not intended as anything other than keeping him safe. It's not really the case here in the UK that the medical guys induce for reasons such as lawsuits and covering their own back sides, so I do appreciate and understand the care with which these decisions are made.

And still. It feels too aggressive to me. Why would a baby stay in, if it's not healthy for him? What is wrong in my body or with him to stay in without needing to? It makes no sense.

The other worry I have is about Dylan. I particularly feel very stressed about the idea that he might wake up at night and doesn't have me but the neighbour or a family friend (who are both awesome btw) tend to him (he loves them both, but it's so much more vulnerable and weird when you wake up and everything is suddenly different and your mummy isn't there as usual).

I had a massive cry about this last night. I just want Dylan to be ok and not be traumatised by the experience of suddenly finding his mother missing in action. We've prepared him immensely about the baby coming and I have no problem with me being away during the days or early mornings, but it's that night time thing where we are so close and I've never been away from him at night, that the thought of him finding me gone kills me. (The weird thing is: he's probably going to be all right and this probably just my own projections, but still, that thought just kills me).

With induction, there is also a chance that everything takes longer and that I have to stay in hospital longer. I seriously dislike staying in hospital anyway, but to be away from the little Dylbee in the nights is another killer on top of it.

So, I'm considering postponing proper induction until at least Thursday which is when I've properly reached 42 weeks. I might ask them later today to do another cervical sweep and just give me the 24hr pessary (which a milder pessary - still prostaglandin - they insert and then send you home for 24hrs), to give this babe another few days to start it all himself (with help from the pessary and the sweep - hopefully).

Labour dust and peaceful thoughts are welcomed at the moment. I want to feel strong about it, but I'm mostly quite emotional and am on the verge of tears a lot. Just want both the bambinos to be ok.

I want to thank everyone who's been leaving messages, been following me on FB and leaving sweet messages of support and love. It means so much to me, I get totally emotional just thinking about how sweet everyone has been. <3 You people are amazing.

Love to all. xoox

PS. A special special heartfelt shout out to my neighbour Corrina who has been offering the most amazing unconditional support when it comes to this (ready to be late for work, leave early from work, come to our house in the night to be with Dylan etc - she makes me cry with her kindness). <3
Posted by Unknown at 11:16 am 30 comments: 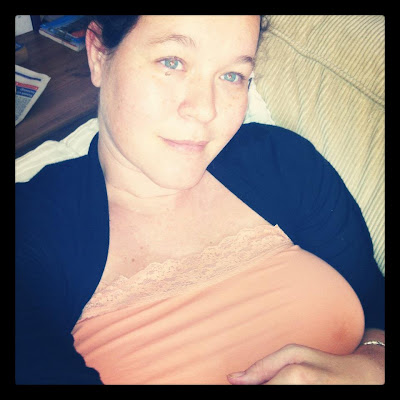 Well gosh! We did not expect this babe to take his sweet old time as he's doing at the moment. You see, little Dylbee came bang on his due date, so we sort of assumed this one was going to do a similar thing! He was due on the 10th and it's now the 14th, almost the 15th! (I know some babies go way over than just 4/5 days, but still!)

All household labour inducing remedies have been tried and none seem to have much of an effect. Gah. I don't mind him being late, but but but, I don't like the idea of being induced, and soon the medical people are going to be a bit twitchy and will want to interfere a bit. Also, the longer he takes, the bigger he'll be and the harder he'll be to push out! And, lastly; the placenta can start to deteriorate as well. All not fun things. So, I ask the bubba to please decide to come out sort of before this Wednesday (which is when my next midwife appt is and when she's probably going to offer me a "cervical sweep"). 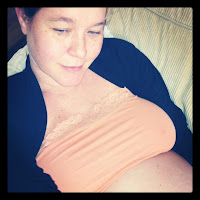 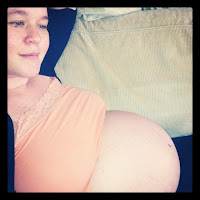 So, it feels like we're in a bit of a 'twilight zone' at the moment. I hadn't made any concrete plans for this week, or any plans at all but be with babe etc! Now, I find myself with a lot more time and space to do stuff (though my energies are incredibly low, so I mostly do low key painting and blogging and things like that, earlier, I had a nap too, it's slow low key pace type of thing :)).

I made a few paintings! I call them 'wacky hair ladies'.  Hee hee. I already posted 'Lou Lou' the other day, and here are 3 more! Ariana, Made of Butterflies and Smokey: 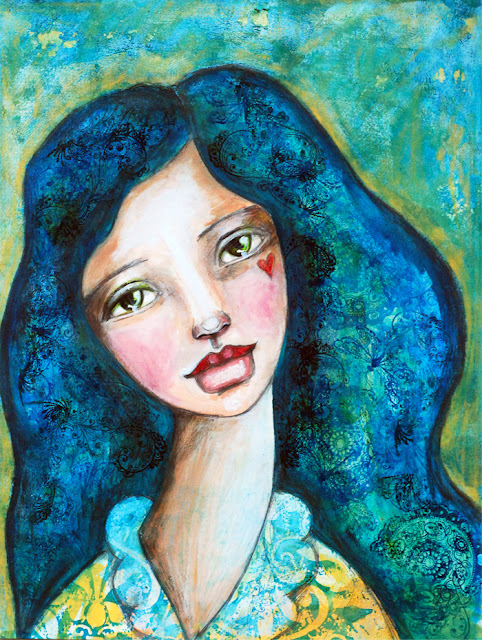 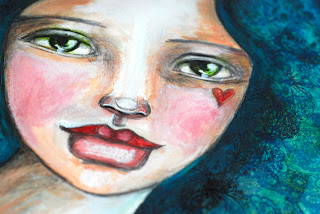 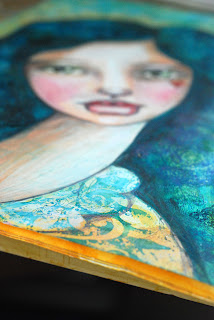 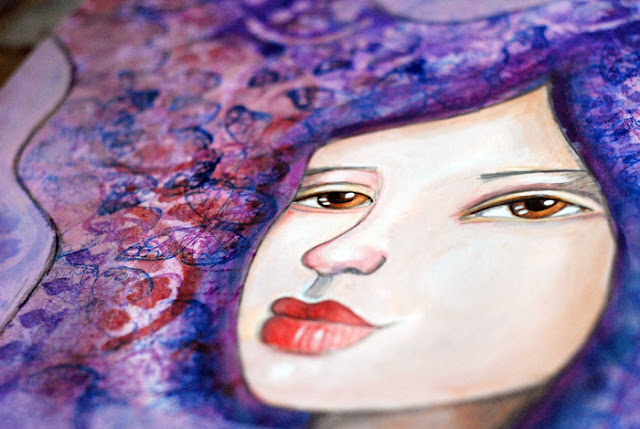 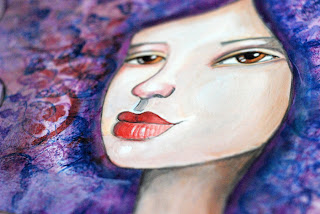 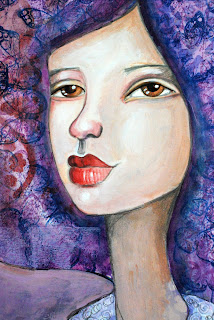 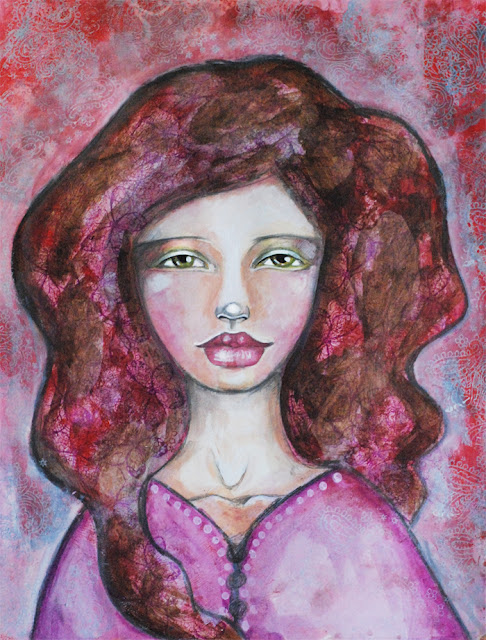 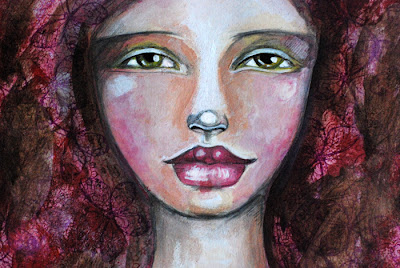 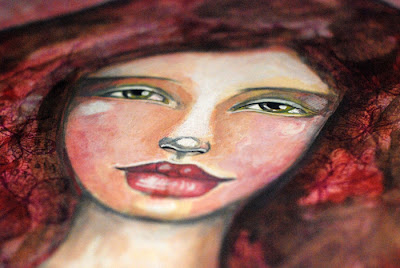 I think the last one's face looks a bit like Tori Amos though it wasn't intended. :) It's real fun making these guys. I'm experimenting with spray inks and stencils, something I haven't done some much in the past. Also, there is loads of rubber stamping and brayering going on in these pieces.

If you're interested in buying any of them (though Ariana is sold already), have a look at my new art blog solely dedicated to the sales of my original art (I used to have shop on my site, but with the new dynamic blogger system, it's much easier to maintain a shop/ sale place like this now, yay!).

My new blog is here:

I AM however still signing up new students for Life Book and other courses.
If you want to join the 400+ students who've already joined Life Book, make sure to sign up 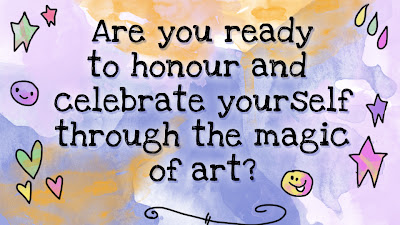 So, today is 3 days away from the official due date. I am swollen, huge and exhausted. Walking is a thing of the past, sitting I do fine and lying down I do quite well too. My concentration is waxing and waning, but I feel so much passion for the work that I do and my family, my Andy, Dylan, this new babe about to grace our lives. I feel privileged and blessed and so very very lucky.

I manage to sneak in little bits of art time here and there and have finished a new portrait, I call her Lou Lou. :) It was fun doing the layering in the hair. I've been playing with a few new materials lately: spray inks and acrylics inks. Yum. But guess what, I dropped a bottle of acrylics ink on the bottom of this painting!! Such a waste! I hadn't fastened the lid tightly enough! I managed to salvage the painting though and in a way it was kind of a 'happy accident' as it gave an interesting extra layer! Lou Lou is for sale, msg me if you're interested.
So, other than that; it's the waiting game now. We're all set, we've got all the hospital bags ready, house is ready to greet the new little one. I'm really excited about meeting this new babe, also; weary of the birthing process (my only consolation around doing this again is that they say that a second baby is much quicker!) Fingers crossed, fingers crossed, fingers crossed! I'm not looking forward to going through that kind of pain again, but hey, it's gotta be done!

Also, of course, wondering about the impact this will have on little Dylan. I very much hope it's not going to be too unsettling for him. And then also, I hope that the birth will go ok and that babe comes out happy and healthy (there is always the small fear about something going wrong!) And there is still the naming thing. Neither one of us is really excited about any of our chosen 'maybe names' which I don't like. I'm hoping that maybe during the birthing process a name will come to me that overrides all of the ones on our list, otherwise, we're going to look at him and then decide. It's been so hard this time round to find a name for babe!

Anyhoo! In other news, I've just published the WEEKLY year schedule for Life Book which looks amazing! Click on the image below if you want to download it too, it looks just DELICIOUS to me! If I didn't run this course myself, I'd definitely go on it. Ha ha!

Want to join the 360+ students
who have already joined Life Book?!